Bling and Other Horsey Stuff 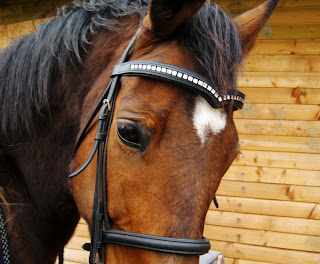 Hello everyone I hope you are all enjoying your April and that you all had a great Easter with plenty of chocolate eggs ;) On a different note look at what Niko has; BLING! Admittedly it is not a great fit but I still really like it, to be honest it’s just a cheap rubbish one compared to some you can get but its still bling. 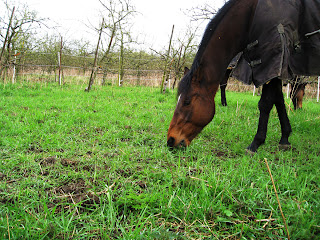 I have been finding it hard to get time to ride as we are nearly constantly having to clear new ground for the horses to graze, there is so much cutting back of the trees that needs to be done and then it takes quite a while just to set up the portable fencing. It really is a pain in the behind as I want to start riding Madeline more too and see if I can get her to be more accepting of the bit. 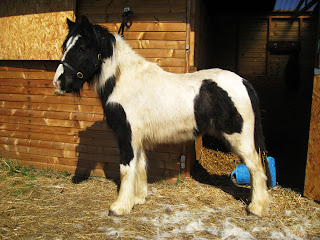 In other news we’ve decided that Pippin will get the cut, because realistically we don’t have the money to start breeding horses and on top of that I’ve checked out the market for gypsy vanners and there is very little point in it. So to save little Pip all the frustration of being a stallion but not being allowed to do what a stallion does I feel it best he gets the cut, now we’re just waiting for my father to cough up the money for the gelding operation.

Also I’ve been doing something new with Murphy it is called horse agility. Some of you might know what it is and for those of you that don’t here’s a video of someone doing horse agility but they are seriously good at it unlike me. Murphy and I have only done two jumps both very small but then he is quite a small pony. As it is oh so rewarding to have your trusty equine jump something with out any lead ropes or head collars I even gave it a go with Niko and Pip they both did one jump each with nothing on like lead ropes or any of that stuff and then I called it quits.
Anyways that’s about it from me I have been trying to keep up with all your blogs just not commenting on them, speaking of your blogs I thought this post on Hopeful Jumpers blog about an Exotic Feline Rescue Center was very cool and interesting, I really do love to see big cats, click the link to take a look for yourself Tiger Anesthesia Day.

We all love our Bling even if it is just costume jewelry...it still is fun! xo

Horse agility is really cool. Good luck with it!

I so need bling in the hunter ring! As for the horse agility it looks freaking fun!

Edward,
I love Niko's bling. Who cares if it is just cheap bling...it is bling and that's all that matters!

I loved the video of the horse agility. How cool is that? I use to do dog agility a little bit with my dog, but this horse agility is totally awesome. I love the tunnel and the weave poles.

I wish you all the best with clearing more pasture land. That is hard work.

I have never seen horse agility before, it looks really fun!!

Hi Edward!
Thanks so much for leaving me a note at my place. Winter into Spring has certainly been rough for me and I get overwhelmed too easily. Nice to hear from faithful horsey friends like you.

You know I love that Bling Brow band... I've a similar one, that is not too much quality either but I love it!
Yours is neat in black on Niko...he is such a handsome dude!

Well yes, the pasture details can soak up time but are essential for your horses...glad that you can do most things yourself. Boarding, if I get to the stable to muck my stall I'm lucky. I love all things horse and to do those things brings you closer to their world, don't ya think?

Good for you choosing to geld your G. Vanner Pippin. Wise and researched.
The Agility video is very cool, that guy and his horse have a great trusting bond!!! Neat you are doing ground work like that...it is so much fun to learn the style of communication with your horse that allows them to do such thing for you!

Carry on and great to see green there!!Hope you can get to riding again soon too!
KK

Niko looks really nice with the bling :)
It must be very frustrating not being able to ride. Heres hoping you can fit some in soon.
The horse agility looks very fun. I've never heard of it before but it looks awesome.

Thanks for all the comments everyone, glad you all liked the horse agility.