Pip’s Feathers Get the Cut 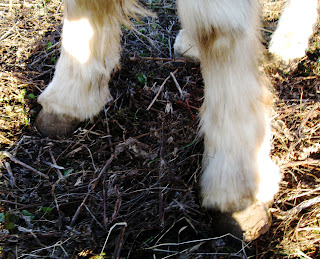 Here is a photo of Pip’s new look. Because it was so muddy we made the decision to cut his feathers, and here they are, it looked a little odd at first but I am getting used to it. He doesn’t seem to mind. 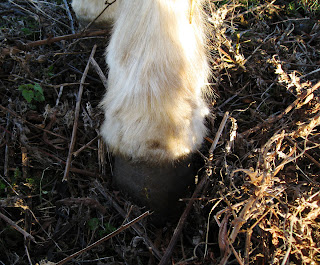 He has surprisingly small hooves under all that feathering, they’re also quite upright as well. I thought he was meant to have great big chunky hooves, oh well I rather like the little sweet sort. 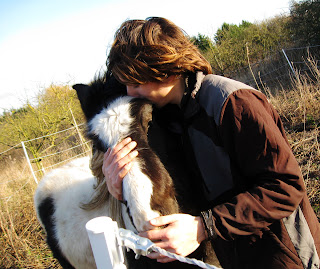 And here he is having a fuss, he’s a cuddly pony, alright bit too cuddly, that coat is making him look almost yak like or maybe more goat like.
Ps I know I need a hair cut.
Posted by Edward at 13:56

Edward,
Your pony is adorable! I can imagine that the feathers get really muddy in wet weather. You did a fine job of cutting them. I wish I could cuddle your sweet pony, but I see he is getting his fair share. :-)

Such a cute pony :)!! You did a great job cutting his feathers off.

Pip seems to be really loving the hugs and kisses he sure is a great pony. It will be so much easier with him sporting the clean hoof look!

What sweet little hooves Pip has..... but then he is a really sweet little pony and I would want to cuddle him too :)

Looks like you did a great job in cutting the feathers and he will enjoy not having so much mud gathered about.
Connie

Oops..my comment got eaten!
Pip's feathers will certainly grow back. For health sake, good call trimming them off.
Love your hair!!
KK