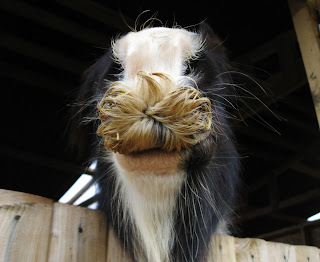 After writing my last post about Pip’s feathers I realized that I still had a lot to drone on about with regards to the ponies. Here’s little Pip, check out the moustache, he’s got a pretty big one now it used to be more like Murphy’s one but is now far more impressive. 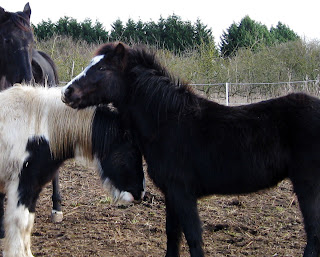 The ponies share a box as they are both very small and the boxes were made with Niko and Madeline in mind, Murphy and Pip both stand at around 12 hands high, Murphy is about 12 1 and Pip is about 12 2. I am not confirming their sizes because  I used a hands tape measure and we don’t have a concrete pad for them to stand on so the measurement cannot be precise. 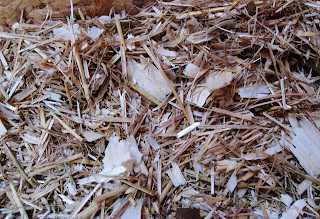 Here’s their bed, it is dust extracted wood shavings that also happen to be scented :) it’s a lovely smell when a new bag is first opened, we use wood shavings for the ponies because they will happily eat straw beds, while I do expect any equine to eat some of its bed Murphy takes it a little too far. 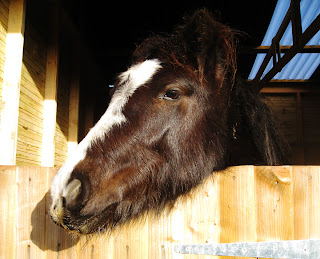 This is Murphy with his morning hair, which means bad. Murphy gets on pretty well with Pip in general and they are play buddies, but. 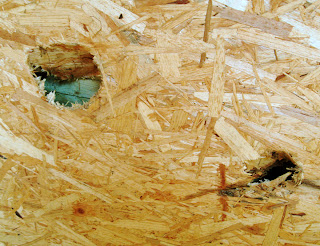 As you can see Murphy can be a little bit destructive, I was not too shocked to see he was able to kick though the kick board, considering they are made of sterling board , but having said that he has kicked me and others a few times and it hasn’t even left a bruise, I guess he pulls his kicks with us. 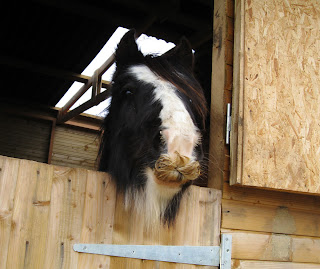 So that’s the ponies and their box it’s all worked out nicely as Pip wasn’t very happy with being in a box, but now he gets to be in with he’s good friend Murphy  Pip has now become very settled in a box.
Posted by Edward at 03:02

So cute with that mustasche, my old pony had one. It's great that they will share a stable, but I'm amazed at the hole in the wall. Naughty pony!

Pip is so cute with his moustache.
We had a mare who would not leave the side of a little shetland pony, so they went into a stable together as best buddies. Murphy clearly is a very highly spirited pony, but you could do without the holes in the walls!

Cute little mushtasche on a cute little pony. Glad to hear they get along well in their box.
Connie

Ponies are pretty comical, sometimes naughty too! That wet mustache totally cracked me up.
KK

I had no idea that Pip had a moustache...how handsome he looks!

I have never seen a horse with a mustache like that...ever. That's really funny! Very unique to me.

So.. why did you cut the feathers - prevention of scratches or just to keep cleaner?

haha the mustache is too much!

Brilliant picture of Pip's moustache!
I've tried to get a decent one of Flurry's for ages without great success. He's already started to lose it, so I will just have to wait til next year.

Thanks everyone for your comments and hello to those of you that I haven’t see on my blog before.

Jeni, I cut the feathers because they had become caked in mud, and I was worried that there may be a possibility of him getting mud fever.