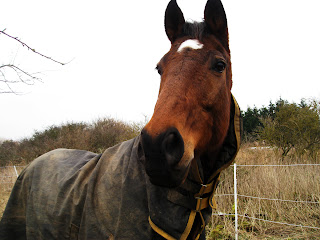 All the snow here has melted and we’ve had a few day of dry weather so everywhere has dried out nicely, the horses are still enjoying their holiday and will probably do so for quite a lot longer, we had a spot of rain today but nothing too bad. 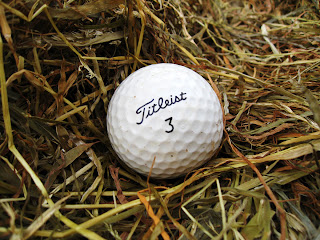 Also we found this sometime ago in our haylage, a golf ball, still I have heard that someone once got a pair of antlers in their haylage. Our recent haylage has been very dry almost like hay, so despite the fact that we are feeding the right amount of food for our horses, they are off work, they are getting two feeds a day, and the weather is very mild they aren’t even fat! And while I don’t really want them fat I would expect them to be and I am worried that Niko will get skinny when I start working him again. 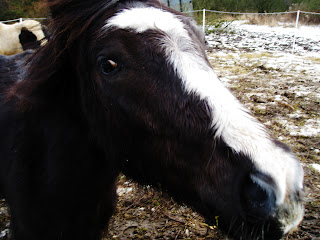 Here’s an old shot of Murphy. I’ve been thinking about him and a show, I’m pretty sure that if we do ever go to a show that I want to show him in an in hand bridle because he gets very fast and it is easy to slow a horse/pony evenly in a bridle where as in a halter he often turns in on me when I try to slow him. Don’t know if any of that made sense. 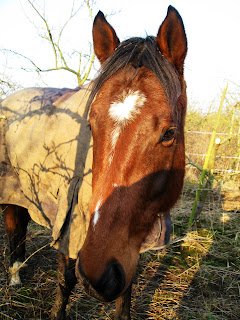 I’ve also been thinking about Tipper’s coat, when I first bought him his coat was horrible with many bald patches and scars, now that we’ve had him sometime it has improved greatly, but it still is a bit patchy and it’s not as full and smooth as the others, which annoys me. So do any of you have some advise on getting his coat right?
Anyway as you can probably guess from all the rambling in my post there’s not a heck of a lot going on right now. Now before I go I’d like to say hello and thanks for following to my newest follower, also apologies to my fellow bloggers for the lack of comments I have been leaving. I do still read your blogs but it’s hard to find the time to read and comment on so many blogs, so a very big thanks to my commenters for finding the time :)
Posted by Edward at 13:25

I think you are very good about stopping by and leaving comments and I do appreciate it very much!

Have a great weekend! xo

We've been using a kelp supplement on our horses, mostly for their hooves, but it's improved their coats no end. GiGi's skin was always very scurfy and she used to always scratch her mane & tail a lot, but she's looking great at the moment. The website is seahorseatlantic.com, not sure if they'll deliver outside Ireland though!

Hello there!
I know what you mean by having limited time to comment around. I feel like a heal when I don't. I miss people too, as when you've done this for a few years, peopel that come around often are your friends.

But, truly I understand because life happens to all of us and sometimes- time becomes short- for sitting at the computer!
I had to get up extra early today to read a little before the "Run around" day statrted for me.

Niko is so handsome. I know what you mean aobut the wieght worries. I have boarded at so many differtent places and the hays have been diverse...I would suppliment "Milk Pellets" to make up the calcium a protien differance or for a fat(cool carbohydrates) I fed Rice bran.

NOW...where I am, the hay is very rich in Calcuim and Protein. There is 1st cutting Orchard and 2nd cutting. The owners had it tested for nutrients...so you KNOW exactly what the horses are getting and what you need to supp. I CUT OUT all gran-save whole oats- for the Phosphorus ratio.

Pantz, my sissy's mare gets Soaked Beet Pulp with her Senior grain and grass hay and Timothy hay. The Beet Pulp has made a huge differance in her wieght. It has NOT gone down this winter like normal.

You take care Edward...sunnier, dry riding days~ are just up ahead.!!
KK

Hi Edward, teitleist are quite a good make according to my other half so at least its a good golf ball :) I used to do a lot of in hand showing with my old girl and they have to be bitted/bridled over a certain age (think its 2), not sure how old Murphy is? As for weight gain and condition I feed soaked barley rings together with mix in the winter. Open you've had a good weekend :) Hannah

Hope I mean not open, I hate predictive text!

Thanks everyone for your comments.

Sherri, and I appreciate your stopping by even on posts that many would probably not bother to leave a comment on, so thank you.

Martine, thanks for the info and web address, can’t take a look right now as they are moving site and the new one is still being worked on but thanks I will take a look when I can.

KK, thank you for taking the time to give me all this advice it is greatly appreciated, I read you’re other comment on my post about what we are feeding, so do you think oats would be a good idea to help with his weight? And are they likely to have a very heating effect on him?

Hannah, well it’s good to know that it wasn’t some cheap rubbish make of golf ball only the best for my equines ;) thanks for the heads up with regards to age and showing in a bridle, Murphy is coming on to three now so that should be ok, thanks.