Bringing Tipper Back Into Work 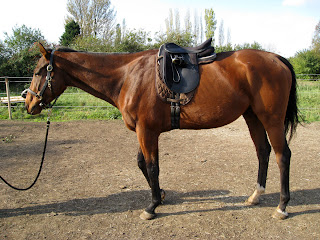 I have just started to bring Tipper back into work. We still aren’t one hundered percent sure what’s wrong with him and why he has been lame on and off, but he has had a lot of time off and he seems to be pretty good so I’ve started to do some work with him. I am just walking him around and trying to get him to stretch with a nice active walk. I am trying to make sure he doesn’t get lazy with one leg, when I first started he seemed a bit lazy with his off fore but today he has been great for me and I was really happy with him. 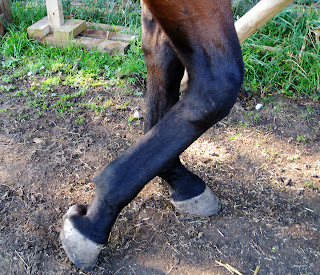 He’s getting a lot better about picking his feet up too. He is still very unhappy about having it done but will at least pick his foot up for me now, he’s still resisting a little but I am hoping that in even more time he will be good about having his feet done. 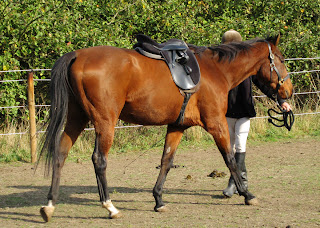 At the moment I am just walking him around the paddock in straight lines and only turning at the corner and then back to a straight line. I’ve also been getting him to halt when I ask him as he is a bit rude when it comes to people and will do things like just walk straight through you, it’s quite annoying but he is getting better and is learning, well I think he is anyway. 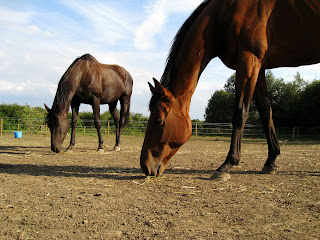 As for why we’ve been having soundness problems I don’t really know for sure, he has poor conformation which could have led to injury in the past maybe even more than one. Still he is on the mend now (touch wood) and all I can really do is try what I am trying and see how he gets on, if he shows signs of lameness again then he’ll just have to go straight back to rest, but let’s hope that won’t be necessary.

So nice to hear that Tipper is doing a bit better. Your are so good about being patient and working him slowly.

I'm so glad that Tipper is better! I hope & trust that he will stay sound!

Good for you and Tipper boy!

Glad Tipper is doing well and you are able to get him back into work again. Spotty has been very stiff in his back and legs so I have an equine physiotherapist coming to see him tomorrow. I am hoping his arthritis is not getting worse.
I do hope Tipper stays sound for you. Abby

There can be so many reasons why horses go lame. We have been lucky and haven't had many issues with that. Really happy Tipper is sound now and doing better.

Thank you all for your comments. Hello to my new followers great to have you along.

Abby, oh I hope Spotty is going to be ok please let me know how he’s getting on.

Glad your Tipper is back in action. I am sure walking at different speeds (slow, medium and extended) will help out whatever is happening. Our Pie is off now and again on his off fore and he works out of it as he walks out.

Glad to you have been able to do some work with Tipper. Fingers crossed he stays sound. You are doing all the right things :) Good luck.

Thank you for the comments.

Juliette, yes he’s been doing all the different speeds I prefer him to extend most of the time but I don’t always make him.

Hannah, glad to hear it and yes fingers crossed he stays sound, I am starting to think he will be ok but time will tell.