What the Vet Said 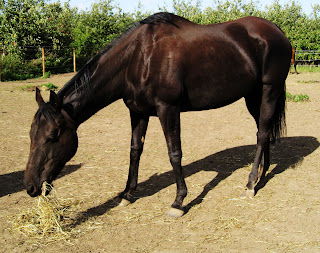 Today the vet arrived to finish off Madeline’s teeth and to give Niko some shots, it was a different vet to the one that had started Madeline’s teeth. He got on really well with Madeline, he had the headcollar on very loose as well as the gag, but Madeline was still as good as gold for him. He told me a bit about what’s going on in her mouth, so if she is still in discomfort now she’s had her teeth done we know what needs to be done, so all was well with Madeline and the vet. 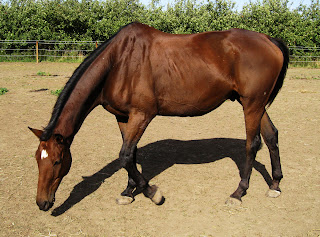 Next up we had Niko which was all very quick with no fuss, I am not even sure if Niko realized he had just been injected, oh well best that way. So that was all we had called the vet out for but seeing as he was there and seemed to know his stuff we asked him about Tipper, as Tipper has not been right since we got him and we have begun to worry that it may be more than just mistreatment which is causing the problems. 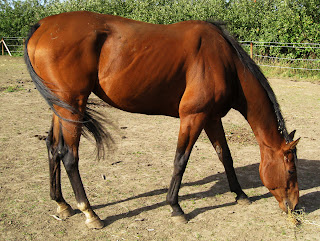 He gave Tipper a good check over, he picked his foot up with really no trouble, he had me walk Tipper and trot him to see how he was. Then he took Tipper and did something I have never see before and will probably never see again, he lunged Tipper using his stethoscope to drive Tipper on. It was quite a funny sight. After he had made Tipper do a few different movements, and checked him out, he had this to say: 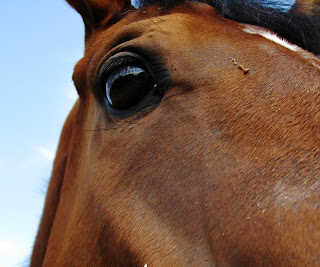 He said that he thought a lot of it was simply that Tipper is ignorant (rude). When Tipper was trotted up he said, “That isn’t a horse in pain” but he also told us it could, take note on could, be wobbles, but there is a good chance it isn’t. He also said it's a good idea to have someone out to check his back and sort it if necessary. He said it didn’t matter what they called themselves be it chiropractors, McTimoney or osteopaths, as they all talk a load of, in his words crap, they can’t rotate the vertebrae or put a pelvis back in place so ignore all the crap they have to say, but some of them can help to make a horse feel better so find one that has been proven to work and use them. 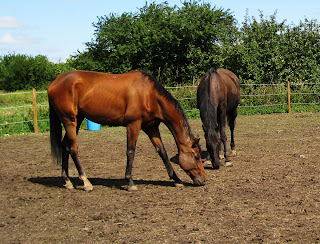 It was a very interesting visit from the vet and he was the best we have ever had and the most helpful, obviously I don’t want to upset anyone and everyone is free to have there own opinion on back people, but this was just what our vet had to say on the matter.
After returning home and doing some research it turns out the vet was in fact the owner and founder of the veterinary group that we use so that would explain why he was so good at his job. Also my riding instructor knows a back person that they say works so maybe we will have to give them a go.

Just came across your blog and am enjoying your posts. Sounds like you have a great vet. My vet doesn't really think much of chiropractors etc either, but in my desperation to try and help one of my mares I got a few of them out anyway and it cost me a fortune without any result. For backpain, I think the best thing is still good old fashioned solid grooming with a curry comb in a circular motion and a TTouch belly lift!

Your vet sounds funny and probably very good, but still, colorful. I don't agree that Tipper, or any horse, is rude.

I hope Niko goes right for you soon. Our Foggy is still a bit nervous from his track days.

I'm glad to hear that Tipper likely isn't suffering a lot of pain or is permanently, seriously injured. To be honest, a little ignorance isn't so bad. You've read about the stubborn Mr. Moon, and sometimes I really think that after they've experienced pain, they can be a bit rude as a means of avoiding potential future pain. Just takes awhile to learn that you're never gonna hurt them, and to trust you.

: ) I think Tipper will come around in time. I'd rather be ignorant then wobbled! : )

At least the vet didn't say "stupid". Ignorance can be fixed with learning... :) Your vet sounds like how a lot of MD's feel about chiropractors. Either way, back massage and manipulation would probably feel good - I guess it all depends upon how deep your pockets are. Wish you would have gotten a photo of the vet lunging with the stethoscope. LOL

It's great that you've found a vet you feel you can talk to and who gives you sound advice (the vet we had in the last place we felt was quite arrogant and only gave us the minimum of information!).
Andrea

Hello Edward, I am catching up on your posts and am so pleased your time with the instructor went well.
I like the sound of your vet... someone who tells it like it is, with straight talking. It is always hard dealing with a horses back and also not knowing what has happened in the past. As Tipper was a race horse, he may have been backed too early, which sadly sometimes happens. The problem with osteo's, chiropractors etc is they cost a fortune. I have used them in the past with not much success. I swear by massage and specific back exercises for horses. Have a look at:
downshouseequine.co.uk and also click on "Author" to see some of the books that Mary Bromiley has written.
Angela Hall, who is local to me, also has a website which is worth a look:
massage-for-horses.co.uk/equine/
As your vet suggested, find someone who is good with backs. Someone who does massage around where you live may offer a course so you could learn to do it yourself. Of course I am not an expert, but like all your followers, can give you advise based on experience. You are already doing what is best for your equines... taking good care of them. They are very lucky indeed to have you as their owner :) Abby

So good to hear that Madeline's teeth are all done and that she liked the Vet.

Poor Tipper, seems no one can figure him out...hopefully the next one can.

Thanks for the comments everyone, and a very special thank you to those of you that offered me advice it has helped a lot.

twohorses, hi and thanks for stopping by. Since reading your comment I have used a rubber curry comb on Tipper and I think it’s helping, I don’t know how to perform a TTouch belly lift, but will try to find out, thank you very much for the help.

Juliette, perhaps rude is the wrong word I think uncouth would be better suited, it’s not a bad thing it’s just he hasn’t ever been shown how he should behave around people, but I am sure we will be able to show him without much fuss.

Sand, he was quite entertaining and had a lot of interesting thing to say, I think now that I feel I know a bit more of what is really going on with Tipper it won’t take too long to get him right, I did a bit with him today and he was pretty good.

Margaret, ha I too wish I had got a photo but I don’t really feel comfortable taking photos of our vets as it is so often a different one we rarely have a chance to get to know one another. I do agree I think if one is trying to pay to have a back sorted out then you need deep pockets, still maybe we can sort this out, time will tell.

Andrea, sounds like a bad vet, I like it when they give you all the info they can that way they sort it out that time and maybe if something happens again you’ll know what to do for yourself. He was a very good vet its just a shame that they send out different vets all the time so we won’t be able to have him out all the time.

Abby, thank you so very much for all the help I have taken a look at the sites and now I think I need to get some books on it, I think it will really help. Today I made Tipper do some very basic stretches and then I trotted him in hand round the paddock, he went pretty fast and my mother watched him go, she said he looked really good, was a bit stiff on the left rein but had a nice action, so maybe there’s hope yet.

Sherri, yep I am very pleased she got on with the vet let’s hope she’ll be ok now. Tipper is taking some effort to get right but we will get him there I am sure.

: ) Just wanted to say, PLEASE post a review on your new quarter sheet (ride-able rug) when you try it out! I'm really interested to hear what you think! (and what Niko thinks!)

Sand, will do but the weather is still a bit too warm so it might be awhile.

Round two of my comments...first ones,days ago did not take. Just as well though, I was upset with your vet for suggesting Wobblers- and yet not trying to help you even figure it out.

I found some good online resources in it though, so you may also.
Glad that your mare was so calm.and now healthful.

I've used, with great successes, an Equine Therapist for years..she has several licences, anddoes continuing education. She is smart and works side by side with vets...recently with Olympic vets, getting her Thermography photographers licences.
She has taught me how to maintain my mares spinal + soft tissue muscle health through massage. Chiropractic adjustments seem to occur as she works on the horse. Muscle.holds bones in place. My sister learned that, " muscle has memory, and bones are stupid". Meaning, if the skelitle structure is right the muscles can keep there with correct work conditioning.

With my saddle being too tight for this past 2 mo and who knows, strains during my.mares struggles to free herself from the bramble ensnarement in July,.she was really.out in her neck today. I have 6 massage techniques to do on her tomorrow. One for her Withers. One for her Atlas, neck, shoulders,back and.front legs.
I'll try to tape me doing them for you.
KK

KK, that would be very helpful if you were to tape the massage techniques, and thanks for stopping by sorry if the vet offended or upset you.