Looking At Your Horse in a New Light Aren’t horses such expressive animals, always twitching those ears or flicking that tail, and most of it means something so I thought I would do a post about horse body language. This photo is of Pip he has just been bitten by a larger, older horse, see how he is opening his mouth he isn’t threatening to bite he is being submissive, gesturing to the older more dominant horse he means no harm. 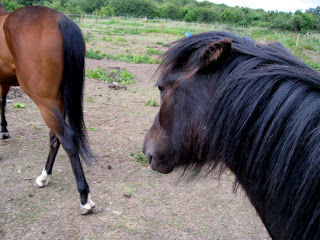 And see here why are his ears pined back, well most of you will know Murphy is doing this in a threatening gesture, but it can mean lots of different things, like if a horse is in a fast gallop they will often put their ears back, and some times the ears are back so that the horse can hear more easily behind itself, but equines have so many ways of showing things. 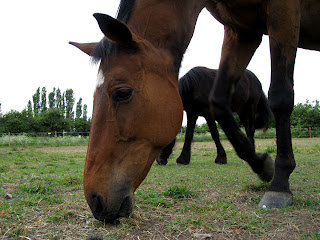 You should be able to see a difference between threatening and listening in the horses face, the nostrils are a good place to start if the nostrils are narrowed and wrinkled at the top, he is being aggressive or showing a dislike to something or it could even be that the horse is in pain, and relaxed nostrils obviously show a relaxed horse. 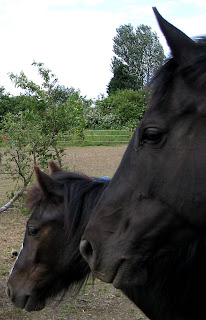 Flared nostrils show excitement, or they can show that the horse is scared or distressed, and of course they can also be flared because of the horse is breathing hard from work. 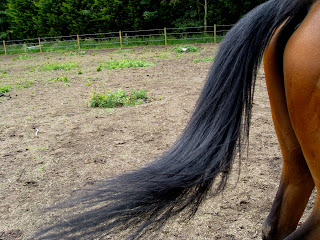 And the tail can also be used in horse body language, the horses tail can swish in irritation often at fly or other insects, or be used to display anger. Horses will also use their legs to show discomfort by stamping or kicking out in irritation, but they may also stamp to show pain or impatience. 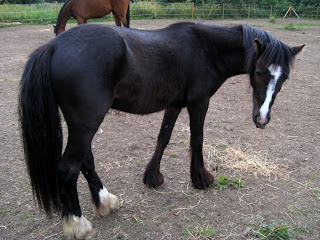 The horse’s body language can be a good way of finding out if they are in pain, if a horse is in pain they may turn to look at where they are in pain and sometimes even snap at it, or they may just turn their eyes and ears in the direction of the pain. 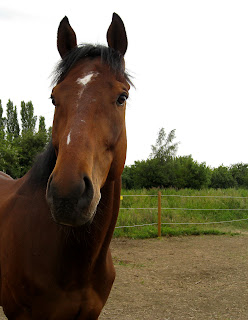 Horses can show us so much with their muzzles as well, they might nudge a feed bucket to show a want for more feed, they will also nudge water containers if empty, or they may show you an itch that they would like you to scratch for them. But in the end it is down to putting the horse’s expressions together, to see just what they are really saying to you. Anyway there is no way I could put all the horse’s body language in just one post so that will have to do for now.

Abby, yes Madeline does look very much like a toddler with all that food up her face, she was going really nicely in work today she is quite a responsive horse, anyway I am rambling but I thought I would let you know we have decided that Bold Hawk’s stable name is Tipper I will be doing a post about it soon.
Sherri, yes I like the bottom photo as well, it is just a shame the camera ran out, Pip and Murphy were running around like loons it would have been nice to have some with Murphy in, those two ponies are a funny bunch.

How interesting that they do so many different signals. Dogs are a bit harder to figure out, I think, and cats, well...forget about it, with them.

What a funny face Pip is making in that first photo. And who is the naughty older horse that bit him?.... poor sweet Pip, hope he climbs up in the pecking order when he is older. Spotty started nuzzling my ear the other day, I couldn't work out what he wanted or was saying. I have all Monty Roberts books, which are very good. They have so many ways of telling you what they want, but sometimes it is hard to tell. Great post Edward, thank you for sharing your knowledge. Abby