Feeding In the Field 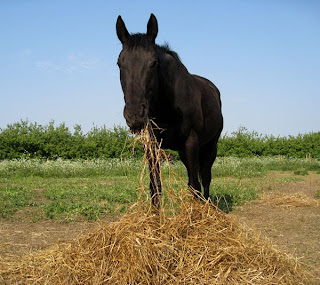 As we have very little grass left in the paddock we are of course feeding the horses and ponies a lot of food, like haylage and they all get a hard feed. Here is Madeline with her haylage, she loves haylage and is nearly always the first to get her food, this is because she is the boss of herd so she shoos all of the others away from the food, until she has got hers. 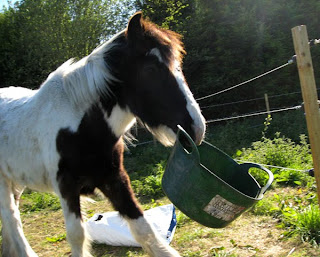 Here is Pip and as you can see he thinks he needs some more hard feed, he really doesn’t. Pip has plenty of grass in his part of the paddock, but he still gets some hard feed and haylage just to keep him happy, because when he sees the others having their food he wants to try some of it, and who can blame him. 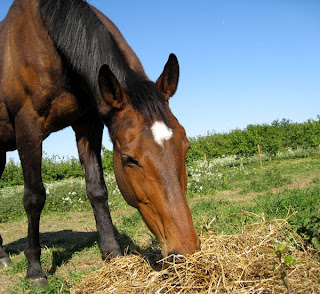 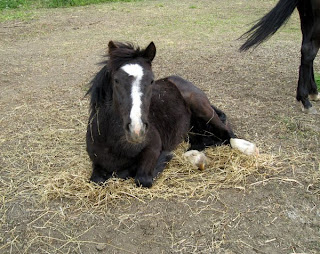 Last but not least Murphy, and hey why eat all that costly haylage when you can just lay in it, Murphy isn’t all that interested in the haylage and prefers to look for tasty weeds to eat, this is probably just as well because he is quite small and gets chased away from his food quite a lot by the horses. Luckily for Murphy Madeline lets him get a way with almost anything, if it was Niko misbehaving she would probably try and kick him.
Thank you all for commenting on my last post, glad you all liked the photo of Niko.

I think that Murphy has it figured out...if he lays on it no one can take it and he can snack on it while resting...Horses are very funny!

We too feed alot of hay...sometimes in the pasture but mostly in their stalls so I can make sure everyone gets their fair share!

Your horses and ponies are such characters and you take some great photos of them, the one of Pip is very funny. My friends horses get their feeds in the field too. When they are finished eating they kick the buckets all over the place and then they all fight over the last bits of hay, I have dodged some hind legs in the past when I have got between them! Abby