First of all I will say sorry I forgot to take any photos of how we are now stopping Niko from cribbing so I’ll just tell you about an interesting visit we had today, and do a post about Niko’s cribbing tomorrow. 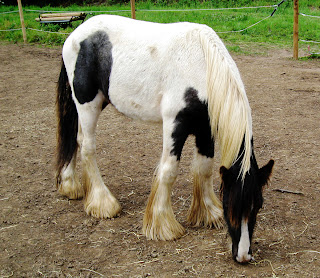 Today the Gypsy that sold us Pip came to see how he was getting on in his new home. He was quite surprised at how small Pip was, he still has growing to do but it looks like he is going to be small when he is done growing. When the Gypsy, who I will call Bob to make thing easier, saw how small he was he offered us one of his other Gypsy Vanners, in exchange for Pip, that he believes will grow larger than Pip, obviously we declined. 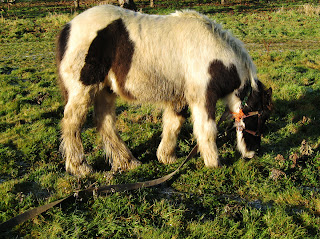 He told us we should put Pip outside the paddock on a tether so he can get to the grass, first of all I don’t like tethering horses or ponies or any other form of equine, so that was also a no, but the thing I find odd about Bob telling us to put him on a tether is that not long ago he was telling us how one of his horses had broken it’s neck by running around on it’s tether, so I think it best not to tether don’t you? 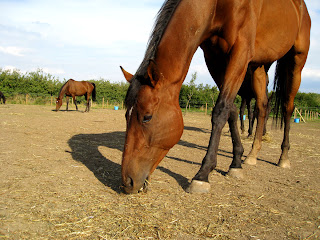 As Bob stood back next to Pip looking at the other horses he saw Tipper and we started telling him about why and where we got him. Bob then started to tell us how meat men were paying a good price for horses of that size. At first I didn’t even know what he meant, until he went on to say he’s just costing you money while you keep him and he’s no good for anything, and then I realized what he was getting at, no thank you sir. 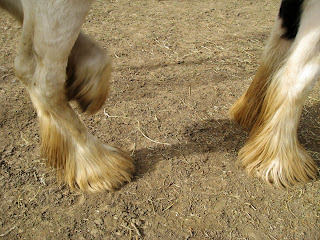 He has advised us to use olive oil on Pip’s tail to make it nice and shiny makes sense I guess, but then he also told us to pour a mixture of paraffin and used motor oil over Pip’s mane and down his legs to remove any mites or varmints as he would say. It is true we do need to consider a way of preventing mites as any horse or pony with feathers is prone to them, but I think that is maybe not the safest way to go about it. 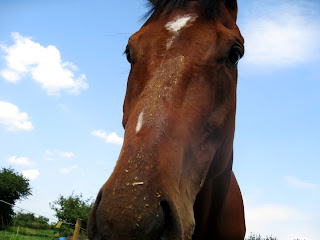 All this said Bob is a nice person if a little odd, but then I suppose he thinks we are odd too, but in a way some of the things he says do make sense to the more harsh business like person. Just as well I am a useless business man, I would rather keep Tipper as a companion or something for the rest of his life than send him to meat.

In yet more other news I have tried the saddle pad for the first time to day and will also be doing a post/review about that sometime soon.

I found out that Spotty came from a gypsy. He (spotty) was discovered tied to a lamp post! I think they tether them as they often don't have fields to keep them in. I would never tether a horse. I think Bob wanted to swap Pip because he probably could see how well Pip looks since he has been in your care and wanted him back! I know that horse dealers look at horses from a money point of view, but the whole point of getting Tipper was to give him a chance and a dealer would not understand why you would want to do that (we horsey bloggers do). I have heard of all sorts of things to put on tails and feathers, but always stick to the
recommended branded stuff to be on the safe side. Sorry Edward, this is a very long comment! Abby

Eeeeeeekkk !! Poor Tipper and poor you for having to hear that horrid remark, and then he wanted to exchange Pip!..I don't care for Gypsy Bob at all!

Looking forward to the report on Niko

Edward, I'm looking forward to hearing about your saddle pad.
About Gypsy Bob - I think you are very kind to put him in as nice a light as you have. He sounds creepy to me! You saying that this guy is "all business," is putting it nicely!!
I'm so glad your horses have YOU to protect them from someone like GypsyBob!!
Great post!

Tipper's too cute! Happy that he's with you, safe and sound. : )

So happy your horses are with you and not with "Bob". You are a kind, safe owner. Keep on doing the superb job you've been doing taking care of horses and writing your blog!

Your horses sound like they have hit the jackpot having somebody to care for them as much as you do. It's true that not all people see horses in the same light (you should see some if the things that go on here in Spain - make your hair curl!) but fortunately there seem to be more that really do care than those that don't.
Andrea
(By the way, I'm in the 'do care' group!)

Abby, a long comment is always welcome don’t worry about it, Spotty came from a gypsy and he was tied to a lamp post! How did you or the RDA get Spotty was he a rescue or was he bought from the gypsy. It’s odd because Bob has lots of fields but still tethers. Oh I know why he wants to swap, they are trying to breed down their Vanners in size and Pip is not yet gelded and is very small, plus he does look pretty darn good.

Sherri, ha gypsy Bob really isn’t all that bad but I can understand why you would not care for him at all.

Deanna, yes I too am very glad that I can protect them as if I hadn’t of got Tipper I fear the meat man is just what would have happened to him.

Sand, yup he sure is cute just as well for him really.

Juliette, Bob wouldn’t want any of my horses apart from Pip he doesn’t like TB and says they are wicked horses, as you and I both know this is complete rubbish.

Andrea, I have heard about horses in Spain not being kept well but then I have never been to Spain so can not say for myself, glad to hear you are one of the caring horse owners, I thought as much.