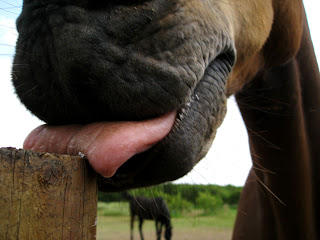 Normally I don’t have a problem with cribbers and I think it best to let them get on with it, but recently Niko has been very lazy about foraging, can’t say that I blame him as there is very little to forage, but it has been causing him to build up weight more towards his front and with his already poor top line he quite simply looks a mess also he hurt his shoulder. So we have stopped him hopefully for good. 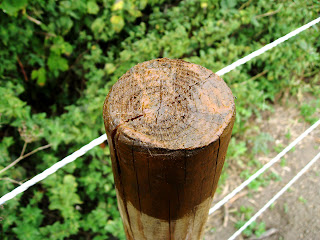 We tried the Cribox and sadly it didn’t work for long as every time it rained the Cribox was diluted and stopped working, so that was just no good as we ended up buying all the Cribox from the tack shop and it still wasn’t enough. 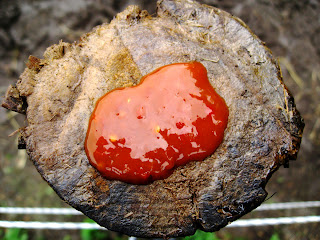 So we tried chilli sauce as we had heard it worked sadly Niko seemed to quite like it and was very happy cribbing on his nice chilli flavour posts, so again no success. 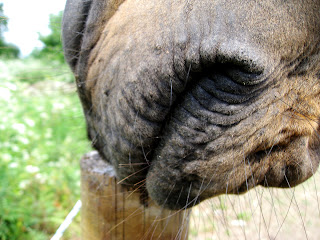 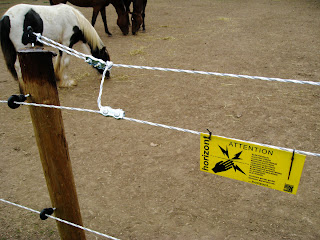 So we finally got around to crib proofing one section of the paddock by running a strand of electric wire along the top of the fence posts where Niko would normally crib, this has worked brilliantly and he now doesn’t even try to get a quick crib in, he hasn’t shocked himself once as he is well aware of what the wire is. 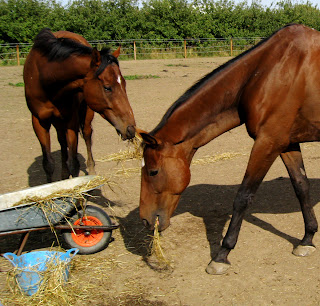 I really am quite happy about this and I do think this will work I know that Niko will never really stop being a cribber and if he gets the chances to crib he most likely will, but he is looking better already for not cribbing.

Tomorrow I’ll be posting my review of the saddle pad now I have had time to give it a fair crack at the whip so to speak.

Brilliant idea and it has clearly done the trick... Good work! A short comment as I went on too much last time! Abby

You went to a lot of work, but it was worth it. Nice thinking!

I beleive that is the most humane thing you could've done. Like you said once a cribber probably always a cribber. I am glad he already knew what the white wire meant. Good job!

My husband and I got a big kick out of this post..especially the chili flavored post, hahahaha! So glad you found such a good solution.

What a wonderful way to deal with cribbing!! I too, am not a fan of the cribber collar and I too have found that anything I put ON the wood would get washed off/diluted so it was not a long-term solution. I am delighted that you got creative and thought outside the box, so to speak. Now the problem is taken care of for good!! Well done!!

It's great that you've found a solution to a difficult problem! It's so hard to stop a horse cribbing once it starts but I think that you may have cracked it - well done!
Andrea

Thanks for the comments.

Abby, long comments are quite alright. I hope it really has done the trick I don’t see how he could wiggle his way out of this one, now we just need to get the whole paddock done like that and all will be well.

Margaret, yup it sure looks like it was worth it.

Mary, yes I think it is best thing to do I hate putting things on cribbers to try and stop them as it is nearly always horrid for the horse.

Sherri, as always happy to hear you and your husband enjoyed the post, just wondering does your husband have a blog of his own?

Deanna, cribbers can be such a pain to stop I am so glad we seem to have knocked it on the head for now. Does one of your equines crib? You seem to know a thing or two about stuff to stop cribbers.

Andrea, I am happy that we have been able to stop him cribbing all the time, but he will always be a cribber and I don’t think I will ever truly stop the habit but don’t mind just so long as he isn’t doing it all the time.

Hi Edward! None of my current horses are cribbers - but I had a pony when I was young that quite the cribber!! The best thing that worked for him was, of all things, vinegar!! At least it's cheap, eh? But I had to keep applying it after it rained. Eventually though- my diligence paid off because he quit. I know that doesn't usually happen though. "Chico" must have really NOT liked the smell or taste of vinegar, so he just gave up cribbing on the wood.