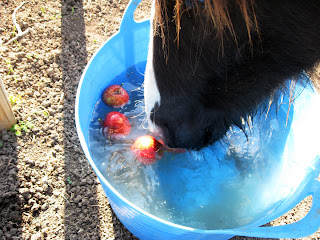 The last few days have been far too hot to ride and so today I decided to play a game with the horses and ponies. As you all know horses and ponies love apples, so as it was such a hot day I thought a water game would be good, and here it is apple bobbing for equines. 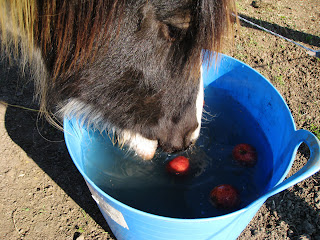 Sadly Pip had rather a lot of dirt in his moustache and it all ended up in the water, Pip tried and tried to get the apple but just couldn’t get a good grip on it. 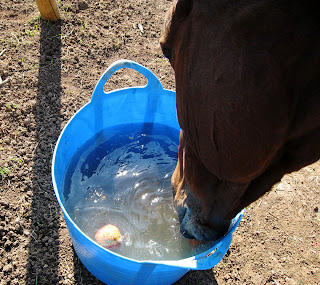 So Niko came to show him how it was done, Niko tried his best and came very close as he had the good tactic of pushing the apples next to the side of the bucket and then trying to grab them, sadly he too just couldn’t get a grip. 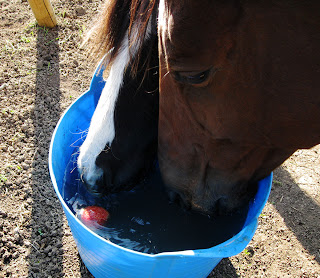 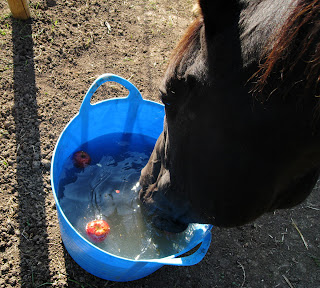 But before he had time to drink enough of the water Madeline sent him and Pip running so that she could have a go. She tried and just like the others had no success.Despite not managing to catch an apple the equines seemed to have good fun.
After Madeline had tried for just a little I took the apples out of the bucket so they could finally have their prizes. Murphy and Tipper did not take part in the apple bobbing because they were nibbling the few bits of grass we have left, but they too got an apple each.

After writing this post I am wondering to myself maybe I had been out in the sun a bit too long.

Looks like they had fun trying to get the apples, I thought they would have had more success, as they have such big mouths and teeth! :) I didn't ride today either as it has been so hot. Spotty couldn't even be bothered to eat the grass in the paddock... not like him at all!! Have a great weekend. Abby

Oh Edward! How totally FUN!! What a hoot!! I was hoping you would give them the apples after all of their effort - and you did!
Great post my friend!!

That sounds like fun! I wonder if you cut them in half or quarter them if they might have success. Either way it's a great way to entertain them and you too!

Oh, hahaha!
Thay was really cute. Hot there still? Amazing, we just got through our 80' s weather run. well guess it is technically Autumn.

Try that again with slightly smaller apples. It may be my friends Arabian but he'd get em .

How you're not burnt!
KK

How funny, I'm so glad that you shared this with us. Bogging for apples is fun and even humans have a hard time doing it. - Have a good weekend!

Looks like they were having a great time. And I bet you had a great time watching them. Thanks for sharing.

That is so cute. I'm sure all the horses had heaps of fun (even though they couldn't get those apples)

I love it! What a great idea. Thanks for sharing and thank you for following my blog. :-)

Abby, too hot for Spotty to be bothered to eat wow I am shocked, our ponies are always such pigs even in the hottest weather. Yes it’s a bit of a surprise they didn’t have any luck with apples.

Deanna, good that you enjoyed seeing them, I felt I really had to give them the apples as they had tried so hard to get them.

Mary, yes it’s very entertaining, but I think they would probably like it more if they could get the apples themselves, so I think I will have to try your idea thanks.

KK, yep still hot here as for how I don’t get burnt I don’t really know I guess it’s because I spend so much of my time outside so I am used to the sun. Small apples sound good too. I am sure the horses are just going to love me trying all these different ways of apple bobbing.

Sherri, yes it sure can be hard I don’t really like doing it myself as I don’t even like apples odd I know, glad you liked seeing the horses trying it.

C and C Antiques and animals, yeah it was all good fun like most thing are for horses just so long as it has food at the end of it :)

Ruffles, hello and thanks for stopping by my blog, yes I think they really enjoyed it, good that you enjoyed reading my post.

Wolfie, happy to be following and thanks for stopping by.

This is so funny. I can't believe they didn't knock the bucket over... I will have to this and see what my horse does. He is CRAZY about apples!