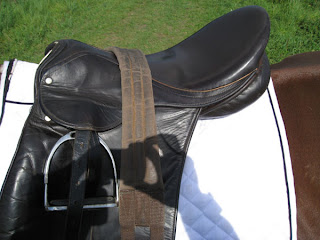 Today I’ll be telling you about what’s been going on regarding my riding instructor, but the photos will be of my saddle, with and with out its saddle pad, because my follower allhorsestuff said it would be interesting too many, so none of the photos will be relevant to what I am telling you. 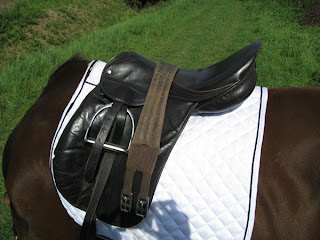 My instructor arrived as planned, first of all they wanted to see me ride Niko in walk trot and canter on both reins, and then jump in trot and canter, so with all that done they were ready to get on and give him a go. 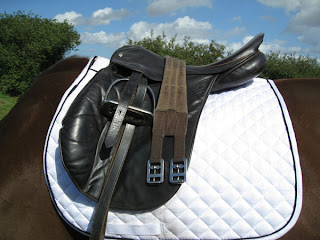 I never really get to see Niko being ridden, so it was really nice to see, at first he was a little bit cheeky and did try to get out of working from behind but only for a little, and then he was good. He really does look stunning when he is on the bit and working nicely, but then he is my horse so I would say that. 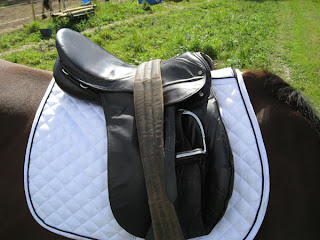 I was surprised at how floaty he looked obviously not as floaty as some dressage horses but still a very pretty picture. My instructor really liked him, they said he was responsive and had a lovely mouth, they also said he was quite rusty, understandably with me on him for the past couple of years, but that he could be quite good in sometime. 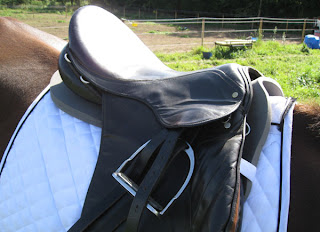 I rode him after my instructor for a little and they told me more about trying to get him on the bit. Afterwards my instructor took me back to their yard, where I was able to see them getting Spike ready for a one day event that they were going to. I saw them jumping Spike and then bath him and plait him and what sort of products they use. 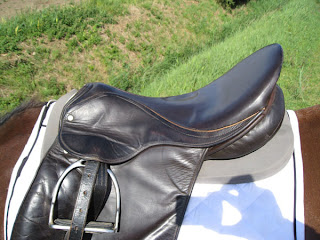 I got to join in with bathing Spike and I cleaned their dressage bridle while they did the other tack. My instructor also took a look at all of our other equines, and gave us advise on them, which was all very interesting.

So all in all it was a lot of fun, and I like to think I have learnt some useful things, plus this was the first time I have see my instructor ride, so I was happy to see their riding lived up to their qualifications.
And on a completely different subject KK if you are having difficulty finding the right sort of saddle pad you might want to take a look at this blog’s post which is about saddle pads.

How fun for you! All these terms I'm trying to comprehend "riding on the bit" etc. But I will learn them all in time. I am learning to ride with my butt tucked under me a bit more and so many other bad habits I have are being worked on. I still am waiting for the girth for my dressage saddle and have been posting in my western saddle. But I do NOW finally understand to post when the outside leg is going forward... and I can finally tell by looking at this shoulders. Yes, baby steps for me! :)

Your saddle looks SO comfy!! I too love watching my coach ride my pony! Oh, and I should say that I hardly noticed your new lift pad under the saddle in the picture! : ) Looking really good!

This sounds really good. It's great if you can find an instructor you can click with. Mine was very good at riding Barnaby but not so good at teaching me, which is a shame.

Thanks you all very much for your comments.

Margaret, bad habits can be very frustrating but I am sure you’ll get out of them in time, as for posting as you call it I didn’t even know that you could do it in a western saddle I didn’t even know you were meant to, but good luck with it next up you’ll have to start rising/posting without looking and just feel it.

Sand, ha it is a cruel trick, it looks comfy but in fact is quite old fashioned and is very hard, I am sort of in search for a new one but all in good time, glad to hear the saddle pad doesn’t show too bad.

Autumn Mist, yup it sure is good, I am really happy to have an instructor that I feel is giving me the right info and is easy to get on with. I think it is important that you get on with the instructor, and yes it was a shame but there are plenty of good instructors out there and plenty of time to find them in.

NICE POST!
Thanks for all the pics too.
I've discovered that my little Wintec comfort pad just makes my pomle area smaller/ tighter fit for my mare. I would try another kind I saw on that link but, it would just set me back too far as it raised the saddle up off her withers. So...since I've been at this saddled fitting jazz for years and 5 other saddles- I think the " Engle Sheepskin" pad is next since this saddle does NOT SLIP or move.
I am so very pleased to hear of your instructors interest and the great ride! That's just great Ed!!
KK