It’s taken me longer than I would have liked to do this post but as usual lots of things have been getting in the way, but now some details on Pip. 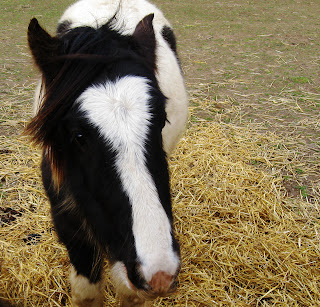 Pip’s full name is, Bayfields Pippin Lord Darby. He was born sometime in May 2010, and he is still entire, his sire’s name is Bobby and dam’s name is Daisy. Pip is a Gypsy Vanner, also referred to by some as Classic Cobs, Gypsy Cobs, or Irish Cobs. Gypsy Vanners were originally bred as wagon/cart horses and children’s riding horses. 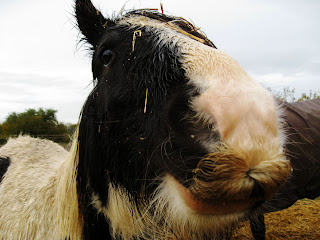 My father purchased Pip to be used for pulling (pushing) a trap, but obviously Pip has a long way to go till he is ready to pull (push) a trap, having said that some people say equines can drive at a younger age than they can be ridden, what is your opinion? All that said if everything goes the way I would like Pip will be broken to ride at the age of four and than broken to drive. As you can see from this photo I am having difficulty keeping the little chap clean with all the rain and mud around here. 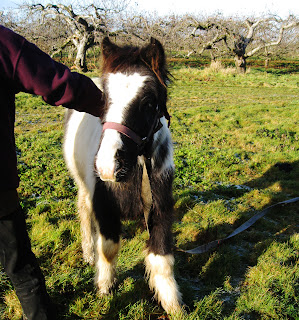 In this photo Pip is on a tether, many Gypsy horses are kept in this manner. I have seen what harm it can do to an equine and I truly hate tethers, needless to say Pip is no longer kept on a tether and now shares a paddock with the other equines and his play mate Murphy Junior. Pip has become a very happy and sensible pony since he was joined by the rest of the herd. 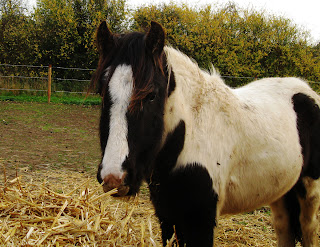 The breed Gypsy Vanner should have a build similar to a heavy horse/ draft horse, with a compact body a short back and neck with good bone. Gypsy Vanners should also have long manes and tails with lots of feathering on the legs, a Gypsy Vanners hair should be long straight and silky. It maybe hard to tell from the photos but Pip has all these characteristics, he is a great little chap, and I was so pleased with him today as I did a little bit of in hand work with him and he was so good for me, he is getting on very well.
That’s all on Pippin for now, next up I hope to be doing the post I metioned about Murphy. Oh and I just remembered another name used to refer to a Gypsy Vanner is Tinker horse, and now I am off.

It is very interesting how you can't ride them until they are older, I had no idea...Pip is the cutest with his little compact body.

Oh I just love Pip! Yes you can put Pip in a trap before he is ridden, which is what happened to Spotty. Of course Spotty had to pull a man and ALL his seven children with goodness knows what else, which is why he has arthritis. Clearly Pip will have a lighter load to pull, so no worries for you there. It will be fun for you to learn driving with Pip :) Abby

Thank you all for your comments, glad you all liked seeing little Pip.

Sherri, oh yes horses well all equines need to have time to develop properly before they can be ridden, sadly some people don’t give them enough time, but that won’t happen with little Pip.

Abby, thanks for letting me know about the driving, and yes it is going to be a lot of fun learning to drive with Pip and I am sure I can count on him to be sensible about it too.

PIP is so beautiful.

Well, I think I answered my question above. You will most likely show him pulling a cart. He looks like a pony... how big will he get. I loved gypsy vanners, but I thought they were horse size.

Pip is adorable! And these photos are just lovely! I do like the two coloured cobs.
Andrea