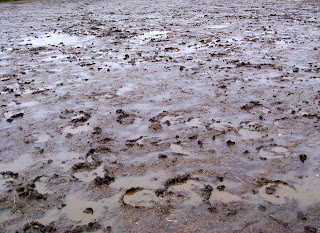 Ah just look at all that mud. Obviously I haven’t been able to ride when it’s this bad, it has dried up a lot since this photo was taken thankfully, but sadly I did have to cancel a lesson. So I’ve got awhile until my next lesson, I guess it’ll give me time to practice what I have learnt.

I’ve also started to try and do more work with Madeline now that I have more of an idea of riding in general as when I re-backed Madeline I was hesitant to start her training because I didn’t want to teach her incorrectly. I am now a lot more confidant and would like to get her going nicely. 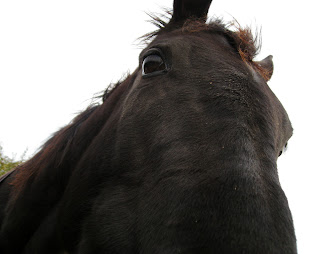 I was riding Madeline the other day when she saw the other equines were having some food. She immediately decided that she would go and have some as well. But of course I wouldn’t let her so she tried to canter off with me sending mud and dirt flying. I asked her to walk for me which she did, but I noticed she had her left ear back in a rather odd way and I found myself wondering if maybe she had hurt herself. So I stopped her, lent forward onto her neck, reached over and took hold of her ear checking to see if she had hurt it somehow and next I knew Madeline saw a bit of haylage and lent down to get it, sending me slipping off over her neck with the grace of a drunken baboon. I swung my right leg over as if I were dismounting but my left leg was stuck in the stirrup, Madeline looked up from her haylage with a bemused look as I wiggled free. I was so very relieved that she hadn’t ran off, so with everything but my pride intact I got back on and finished the ride. 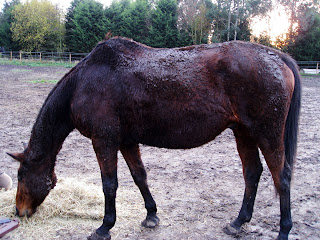 Now steering away from my little bit of foolishness here is a photo of Niko after rolling. Niko and I had just finished working and I’d un-tacked him, given him a quick brush down and off he went to get muddy. I hadn’t the heart to stop him because he hasn’t had a really good roll like this in some time. I have to say I think it probably wasn’t a good idea, I am still trying to get the chap clean. He loves to rub the mud on his face. 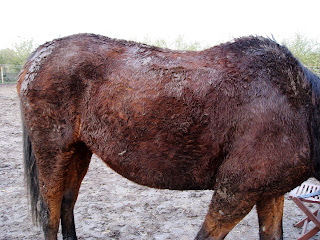 Anyway that’s about all from me, oh and if you were wondering why I thought Madeline might have hurt her ear I am ashamed to admit it, but seriously, I thought she might have flicked mud up into it, turns out she was just a bit put out because I wouldn’t let her go eat.
I know, I know, how have I survived this long?

Oh no poor you! And naughty Madeline.... horses and ponies will stop at nothing to get some food!! The fields are so muddy now, and I am grateful that I can use the indoor and outdoor schools at the RDA centre. It is a shame that you have had to miss a lesson, but as you say it gives you a chance to practice what you have learned. Niko does look like he has been having a good roll! There is so much more grooming to be done in winter that's for sure.
Have a great weekend.
Kind regards, Abby

Your muddy mess looks just as bad as our chicken areas when we get all the rain...Is there anything worse than trying to take care of business while slipping and sliding?! Oh, and thanks for the hint, I will be sure to be careful while checking the chickens ears, hahahaha!!

Your mud looks just about as bad as our mud! I am so tired of the mud and this week the forecast calls for more rain.

It's funny the things horses will do for food! They have a one-track mind!

It rained hard here last week too and our arena turned into a small lake which made riding very messy and squelchy!
My horse does the same too - as soon as he's brushed and clean he has a good roll in his stall and gets covered in chippings!
Lucky your fall was one of the non-injury types and good for Madeline not running off - she sounds like a good character.
Andrea

This is really, really funny (of course, I only laughed once I found out you were not hurt...)

Hehehe sorry for laughing, but that is hilarious. I wish it was a video lol. However I am very glad neither of you were hurt. :D

I understand your feelings about Madeline. I'm worried about starting Chrome by myself because I don't want to teach him wrong. I do know how to get a horse started Western, but this is my first horse to start in Dressage. :) Good luck with her. You'll do great with her as you both learn.