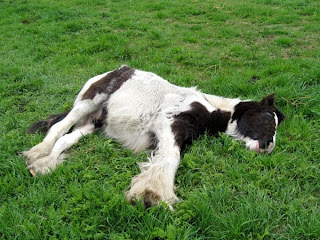 Just look at them they are all so happy here. Pip loves the company even if he can’t get to the other horses and pony, he has been sleeping by the fence next to the others. As you can see it’s very sweet, and when he is asleep he is not trying to bite me so that is a big plus. 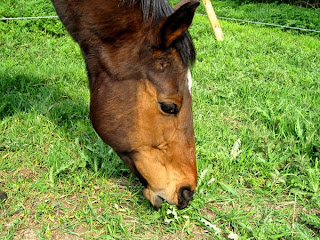 Poor Niko the first time he tried to have a rest here he went down in a patch of stinging nettles and ended up with nettle rash all over his shoulder and a bit up his neck, he now walks around the nettle patches, but he too is very happy here and has leant to avoid nettles. 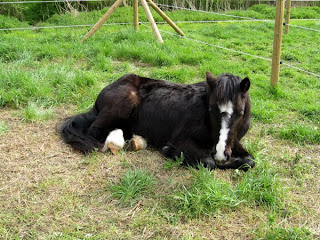 Murphy too has been lying down but I haven’t seen him fast asleep like Pip yet. Murphy is a funny little chap he will lie down and then he starts to graze while he’s down, he has also taken to following me around the paddock waiting to be groomed. 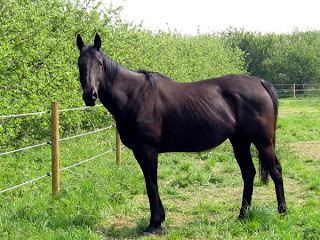 And of course Madeline is loving it here, she has been a lot less bossy toward Niko since she moved here. She has never been very bossy with Murphy. She is lying down as well catching that sun shine and having a great time of it all.

Sherri, yes let’s hope they don’t make a habit of biting me when they don’t want to work, as I am going to try doing a bit of riding tomorrow.

Abby, yep now he knows that he is not being left behind he is quite happy just to graze, no more running around like a loon for that little pony.

Kritter Keeper, I ride English style, and as to what happened to my finger Madeline bit it when I tried to stop her eating goat feed and has done quite a bit of damage.
All Horse Stuff, glad to hear you are getting better, and no I was not really ill, I was bitten by Madeline which stopped me riding, but it has almost healed.

I love the photo of Pip, I wonder what he is dreaming of?! Poor Niko getting stung, (he must have sensitive skin), he is sure to avoid the nettles from now on. They all look very settled in their new paddocks and enjoying the sunshine too.
Hope you have a very Happy Easter. Abby

Your horses look so healthy and happy, I bet you all are feeling like you made the right choice in moving them.

Happy Easter to you and your family.

They all look as if they're settling in really well. Pip is so adorable. Sorry to hear about your finger incident! Hope it gets better soon so you can get back in the saddle.