Say Hello to the Tree Net 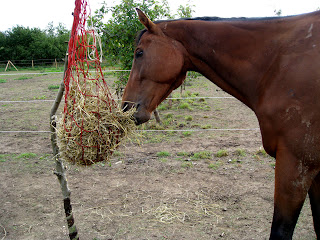 Look at him doesn’t he look happy, dirty yes but happy, with a nice hay net. I have almost missed filling and hanging hay nets for the horses, since we moved I have not filled or hung a single hay net, until today, and yes that is a hay net in a tree. 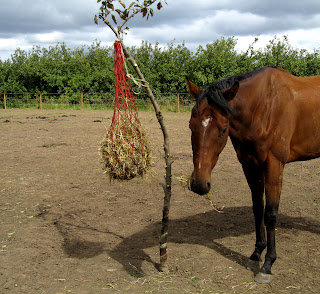 Since we moved the horses have been living out and I haven’t had anywhere to hang hay nets so I decided enough was enough, and now I have turned some of the trees into handy hay net holders, I had to cut some of the branches off so that the horses wouldn’t hurt themselves when they tried to get to the hay net. The trees in the first two photos were already nearly striped bare of leaf but I took off the little twiggy bits. 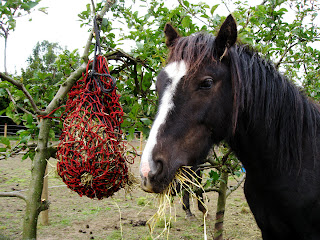 And here is Murphy enjoying his hay net. The trees in his part of the paddock have a lot more leaf on them so look a bit better, Murphy really loved his hay net and it gave him more to do for longer. 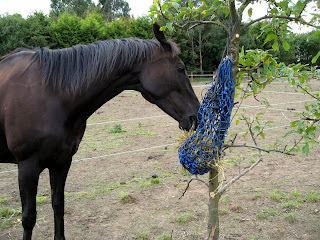 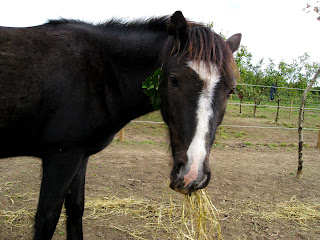 And finally here is a photo of Murphy unaware he has taken some of the tree with him, funny little chap he does get quite carried away and shakes and waves his head and hay net around so I am guessing that’s how he got the leaves in his mane.

You are very clever using the trees and they all seem to be quite pleased with your invention!

What a good idea, I never thought to hang the nets from trees.... Having said that there are no trees in the fields where the horses are kept so it's not an option anyway! They all look like they are enjoying having their own nets to eat from. When the hay is put on the ground it tends to be a free for all and some end up getting more than the others. That is why I am not too bothered about Spotty putting on weight. In winter he gets bullied when the hay is left in the field and ends up getting hardly any to eat. If we get another hard winter he will need the fat to keep warm.
Love the picture of Murphy, he has such a sweet face, like Pip. Kind regards, Abby

It looks like a summertime version of the "Charlie Brown Christmas tree" but instead the "hay net tree" :)

Ha! Murphy's a total cutie! Better tell them not to rip out their hay-net hangers! : )

Those trees are not long for that field I fear!
Nice hangers, while they last Edward!
Guess you'll have to sink some nice posts after their demise! Maybe mount some brushes on them for scratching, in between hay net holding.

We here have discovered the
" Porta- Grazer" and are about to invest in one for my sisters mare, Pantz. She is a terrible hay waster! Moves it, stomps on it...does other stuff on.it then , won't eat it.

This is a great idea - and I'm sure it keeps them entertained for much longer!
Andrea

Sherri, yup they sure like having a hay net.

Abby, poor Spotty being bullied at least he is in good hands, Niko isn’t very good at getting himself a nice helping of haylage because he goes off to have a bit of a crib and when he comes back the others have munched his haylage.

Margaret, hmm that makes me want to put baubles on the trees and hang carrots from them, yes odd I know.

Sand, yeah Murphy sure is, but too late to tell him no pulling out his hay net hanger.

KK, yes Murphy got carried away with swinging his hay net around and ripped a tree right out of the ground, I’ll have to show some of Murphy’s work in a post, Porta- Grazer sound like very good idea I hope it will help out.

Andrea, yes I am sure it will but I wonder how long it will take them to pull all the trees down.