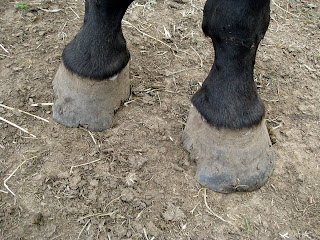 The farrier did indeed arrive and on time too. Take a look at the photo of Niko’s hooves before they had the work done on them by the farrier, as you can see they are not very nice, they had become broken at the sides, which meant the shoe did not fit correctly. 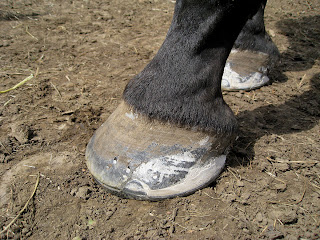 Now normally with our old farrier they would just put the shoe on and let the hoof grow in to fit the shoe, but this does mean that the horse can easily cast his shoe before the hoof has had time to grow to fit. Niko has done this many times, but not this time. The new farrier fitted him with new shoes that have two clips rather than the old ones that only had one clip on the front of the hoof, and to prevent Niko from casting his shoe he filled the areas were the hoof did not cover the shoe with Polly filler. There are professional equine products that can be used for this, but they are normally used to rebuild the hoof if the horse has suffered a serious hoof injury, so obviously this was not necessary for Niko. Because of the great job the farrier did and extra effort he put in to doing Niko’s hooves they have come out really well, and Niko has that extra little spring in his step. 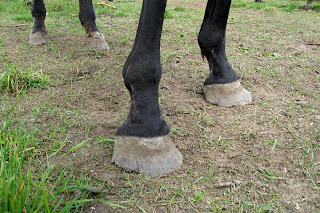 Now on to Madeline, this is a photo of her hooves before she had work on them, they are also a mess. Madeline can be a tiny bit rude with the farrier and by rude I mean she kicked one on the leg, they were ok but it didn’t go down very well, I did tell the new farrier that she can be bad. So when it came to the back legs he ran his hand down the leg standing to the side of her she gave a quick kick out, as soon as she put her leg back on the ground he picked her hoof up and stared work. When you are picking a horse’s hoof out or working on a horse’s hoof you hold the leg and stand so that they cannot kick you, anyway the farrier successfully trimmed all four hooves, by being careful yet competent and quick to reward with a polo. 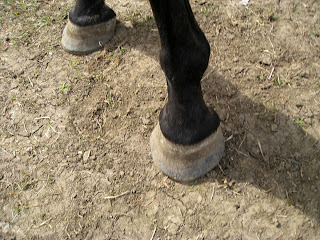 Here is a photo of the finished hooves, while they will never look as good as some horses hooves, she naturally has ugly hooves that are very plate like and flat, never the less they look a lot better then they did and today when I rode her she went beautifully so I am very happy.

Well that is it for part one, next post I will be telling you how Tipper got on and how the ponies did with their first ever farrier.

I am so gald you found a competent farrier. Good hoof care is vital to a horses health in general. I bet those two are quite pleased with their new "feet". I think a good farrier is worth his/her weight in gold. It's a true gift to be able to work with a difficult horse. I haven't read how the rest of the herd went, I'm hoping it went well.

Finding a good farrier is so important and makes such a difference. Glad that you managed to find one that suits your horses.
Andrea

Thank you both for the comments.

Mary, you can now read about the others as I have just done part two, oh yes I think they are very happy with their new feet, Niko is a lot more sprightly now.

Andrea, thanks for following my blog and leaving a comment, and yes it is very important to find the right sort of people when working with horses.