What’s Been Going On 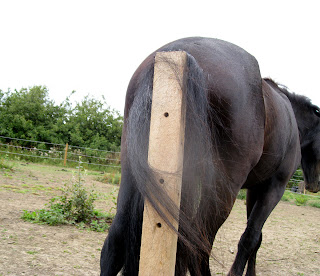 Today has been a lot of fun, all the equines have been doing a bit of work except Pip who has just been having a groom, but he did roll afterwards so he is very dusty now. As for Murphy he has been doing some real work, he’s been jumping in hand with me and he went very nicely and didn’t knock a single jump down he didn’t even clip it. But the jump can’t go too big as I have to jump it as well, as you can see there are more uses for a jump then just jumping it, like a bum scratcher, and a very good one it makes too. 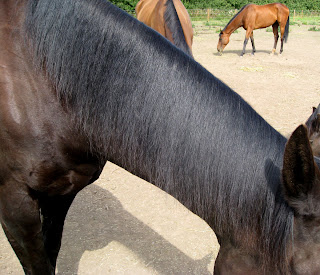 As for Madeline she has been doing a bit of work too, she’s been doing some bending exercises and she’s been practising her turn on the forehand, which she did very nicely, her mane is also looking good even if I am still having trouble keeping it on one side. Tipper also did some work in hand, and I lunged him just in the walk but he was quite good about it so I was very happy with him, and he was pretty good about having his foot picked up, I think lots of treats are helping as he now knows he gets a reward when he lets me pick his hoof out. 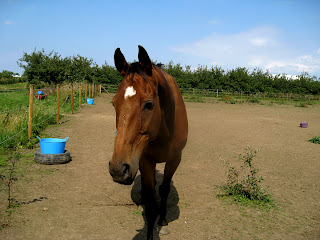 Niko has been great today and I am really happy with him. I started his work by doing some exercises with him in hand, and then went on to lunge him I was happy to see him really working from behind, I hope I can keep him this way inclined, he will look so much better for it. I do have some not so nice news, just as we were giving the horses and ponies their last feed of the day Niko got choke, so that wasn’t so nice but with a bit of neck rubbing and some walking around he was soon fine and back to stuffing his face.

Anyway that is about it I am very happy with them all and they’ve all done a super job to day.

How nice it is to hear that Tipper is getting on so well and is so happy...you are doing such a good job!

Isn't it wonderful when you have a day like that. Sounds like your weather is good to do some training. Love the bum scratcher. Bet he loves that! A choke; how scary. Hope Niko is doing much better. Lucky that you were there. Debi

Thank you both for your comments

Sherri, thanks glad you think so, he really does have a nice temperament so that make everything a lot easier.

Debi, yup the weather has been pretty nice bit hot today but mostly it’s been good. Niko is fine now and is back to normal so all is well.